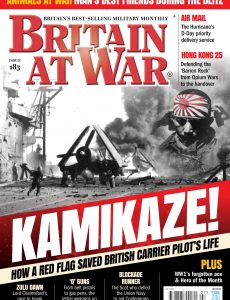 I want to kick off this month with our cover story: Melody Foreman’s interview with her late friend, Keith Quilter. He was a proud Fleet Air Arm pilot with an incredible story of service in the Far East, so enjoy his tale of luck as he recalls the kamikaze attacks on HMS Formidable and being shot down within sight of the Japanese coastline.
Another beneficiary of luck – and certainly of fortune – was Joannes Wyllie, a Scot who mastered a Confederate blockade runner. We find out what motivated him, and, believing the involvement of
Britons in the American Civil War to be unusual, we explore our forgotten impact in a bloody war between brothers.
July sees the 25th anniversary of the handover of the former British colony of Hong Kong. Considered by many to be the last act of the Empire, the 1997 transfer of sovereignty to China is something I hope resonates with readers, as I suspect many of you were born, lived or served there. As a very young boy, I keenly remember discussions with my mother about the significance of the coming handover – in fact, it is one of my earliest memories of a major global event, kickstarting a lifelong fascination with history. Therefore, I am delighted to welcome Dr Kwong Chi Man and his exploration of Hong Kong’s military history. He told me: “I do hope readers with any connection with the garrisons in HK and the Far East can find their place in the timeline.”
Continuing the colonial ‘theme’, Gerry Van Tonder returns with a Zulu War epic covering the Siege of Eshowe, which was both larger and longer than Rorke’s Drift. This battle set the stage for ultimate victory, but what of the fate of its beleaguered garrison?
We also reveal how a Zulu assumption regarding the rear sights of rifles spared the lives of many redcoat soldiers.
In this magazine issue, we also explore the eclectic range of firearms used
by the Special Operations Executive. Many of you will be aware of SOE’s iconic clandestine pistol, the Welrod, but this was just one of a stunning variety of equipment. My thanks to IWM London, the Military Intelligence Museum and the Royal Armouries for digging out the firearms that once belonged to some legendary SOE personnel, as well as some of the more unusual types used by SOE agents, including a rare American submachine gun that
I never would have believed was in the arsenal. And, finally, in this time of rising costs and unprecedented financial pressure, I would personally like to thank you for picking up Britain at War Magazine and remind you of our money-saving subscription offers – please see pages 48-49 for details.