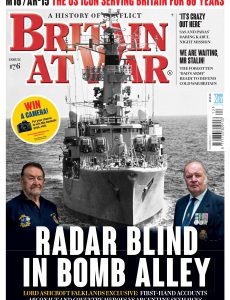 Welcome to your December issue of Britain at War Magazine.

It is hard to believe it is almost the end of the year, but I imagine for some it is harder still to believe that next year marks the 40th anniversary of the Falklands conflict. Lord Ashcro has published the latest book in his ‘heroes’ series, Falklands War Heroes, and in his exclusive article he spoke to two veterans of the war at sea. Chris Pollard was on Coventry during the fateful raid in which she was sunk, and Michael Townsend was pivotal in saving Argonaut from a similar fate.
We’ve all heard of ‘Dad’s Army’ thanks to the timeless TV comedy series and many will be aware of the well-trained, well equipped reality of that wartime home defence force. Austin J Ruddy explores a far lesser-known Home Guard, a 1950s iteration that was (ostensibly) as well-equipped as the regular army. It had no heavy weapons, though. Formed to defend key sites from potential Soviet airborne troops, Home Guards with vintage bolt-action Lee Enfields would have been pi ed against AK-wielding VDV. And, if things really went sour, they may well have faced T-54/55 tanks with PIATs – quite the mismatch. Spirit and experience aside, the force had more in common with the perpetuated myths of the sitcom Dad’s Army than the genuine wartime force. Yet, as one Cold War home guardsman maintained: “We’d have a bloody go at the enemy if he came”.
Another must-read is James Hoare’s interview with 106-yearold William Earl, who spoke about his service as a medical orderly in Italy in 1944. Earl, who was caught up in ferocious shelling in the Anzio beachhead, candidly speaks about his efforts to save lives – and of one man who died in his place.  e recent Kabul evacuations have only recently been on our
TV screens, but thanks to Craig Allen we have an incredible new perspective. In his fascinating feature, he focuses on the role of the Parachute Regiment in the operation.
And last, but certainly not least, Melody Foreman was fortunate enough to sit down with Ba le of Britain hero Paul Farnes to talk shop about flying Hurricanes during the struggle of summer 1940. Li le did Melody know at the time that this was probably his last interview before passing away at the age of 101.
Note: Due to production issues, our planned article on Trophy Guns has had to be posponed and will now run in January 2022.