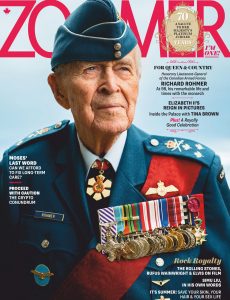 THERE IS NOTHING LIKE statistics to dash the construct that age is just a number and a matter of opinion – your own.
The 2021 Census results released in April showed that, although you may be as young as you feel, aging marches on. Those 65 and over now make up 19 per cent of the population, while those 85
and up (members of the inter-war and greatest generations) are the fastest-growing age group, with a 16 per cent increase in centenarians since 2019.
But boomers who have long enjoyed flexing their demographic might are on their way to losing the leverage of scale. For the first time since the end of the baby boom in 1965, they make up less than a quarter of the population, with millennials born between 1981 and 1996 powering up as the fastest-growing generation.
This magazine was founded in 2008 to track and reflect on a particularly 21st century story – the great arc of boomer longevity. Our name is a nod to the phenomenon, but also presents the idea that aging is a moving target and, as the years progressed, our philosophy and content would eventually service readers who hit middle age, whatever the generation. We marked the lift-off point at age 45, and now Generation Xers – who are between 41 and 55 – are well into our cohort.
Like boomers, who have been unfairly stereotyped as grasping and self-centred, Gen Xers have been saddled with a perception that they are couch surfers with low expectations – “they will never be the largest generation,” sniffed one newscaster reporting