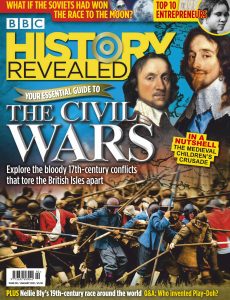 The Civil Wars of the 17th century turned life upside down for people all over the British Isles. As Charles I and Parliament fought bitterly for control, ordinary men and women were sucked into the conﬂict and families were ripped apart: brother ﬁghting brother, father battling son, neighbour against neighbour. Ultimately, Charles I lost his head and England was declared a Commonwealth, until history turned a full circle and the monarchy was restored in 1660. is month, we’ve teamed up with Professor Mark Stoyle to explore the Civil Wars in more detail – from the road to war and key battles, to propaganda and Charles’s execution. Turn to page 26 to ﬁnd out more.
Fast-forwarding to the 20th century, a new eight-part BBC series this month will explore the heinous crimes of serial killer Charles Sobhraj (nicknamed the Serpent for his ability to wriggle away from capture), who left a trail of death and destruction across Asia in the 1970s. We take a closer look at his story, and discover how he was ﬁnally brought to justice, from page 58. e Serpent premieres on New Year’s Day on BBC One and BBC iPlayer. Elsewhere, we share the stories of ten entrepreneurs from history – from the haircare empire of Madam CJ Walker, to the ‘try again’ attitude of Henry Ford (page 65) – and separate fact from ﬁction in the medieval Children’s Crusade (page 21). We also join 19th-century journalist and adventurer Nellie Bly on her whistlestop tour of the globe (page 16), and find out more about one of England’s most famous kings: Richard the Lionheart (page 56).

I hope you all have a very healthy and happy New Year.
Charlotte Hodgman
Editor
Download from:
NitroFlare