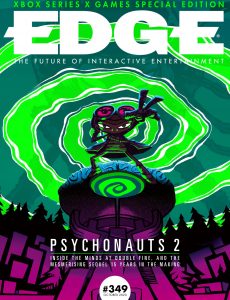 This year started out dark, and proceeded to get even darker. When the horizon looks indistinct, it’s the trailblazers that we need the most: those who are confident enough to charge ahead into the unknown, like a beacon, for the collective benefit of everybody following behind.
Arthouse videogame festival A Maze Berlin has been doing exactly that for 12 years now. Set up to spotlight the kind of openly political games the= mainstream industry wouldn’t touch with a ten-foot pole, over the years it’s become a staple community event. After the festival’s funding request was rejected last year, and a pandemic hit at the beginning of this one, any sensible organisation might have admitted defeat. Fortunately, A Maze is anything but sensible. In Knowledge this month, we talk to its founder about how his team translated a physical convention to an all-digital experience – all while protecting its core values. The answer involves more flamingos than you might expect.
On the other end of the spectrum is publishing giant Microsoft, which recently unveiled a next-gen strategy that – while not exactly unexpected for those of us who’ve been paying close attention to what it has been doing with Game Pass for the last few years – takes a different view to its competitors as to what next-gen gaming should be: creative, diverse and, above all, accessible. Outside The Box takes a look at just some of the titles coming to Xbox Series X via Microsoft’s subscription service.
But one in particular deserved a spot on our cover. That game is Psychonauts 2, the long-awaited sequel to Double Fine’s brilliant and unabashedly bizarre 3D platformer – which we’ve played before any other media outlet. Psychonauts has always been ahead of its time: back in 2005, its brain-hopping premise touched on themes that the high-profile videogames of today are only just daring to tackle. But right now, it feels very of the moment. When things get dark, it’s those who stay true to themselves, and each other, who shine brightest. The story begins on p54.