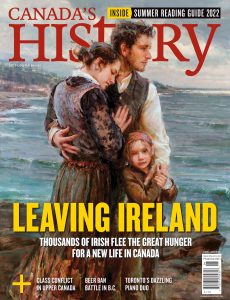 When I was young, my granny Dorothy Reid would pause by her calendar every March 17 and smile. “St. Patrick’s Day. That’s my day,” she would say.
At the time I was confused, because everyone in our family knew that the Reids were Scottish. It said so right on the first page of the ancient family Bible that had been passed down through generations; the first Reid in our family to arrive in Nova Scotia was John Reid — “from the Isle of Skye” — born in 1784. Bagpipes and haggis?
That made sense to me. But shamrocks and leprechauns?
It wasn’t until a few years later that I learned about the concept of maiden names. It turned out that Granny wasn’t always a Reid! Her last name had been O’Connell, and her affection for St. Patrick’s Day was suddenly made clear.
Since that time, I have always wondered what either inspired or drove my Irish ancestors to leave the Emerald Isle. Were they lured by ambition — by the prospect of prosperity in the New World?
Or did they flee from hardship and want? Canada’s first known Irish immigrant was Tadhg Cornelius O’Brennan, who reached New France in 1661. Irish people continued to move to British North America in the 1700s, but the trickle became a flood in the mid-1800s thanks to a human catastrophe known today as the Great Hunger.
In this issue, author Don Cummer explains how recurring outbreaks of potato blight, which began in 1845 and were aggravated by British imperial policies, led to widespread famine in Ireland — prompting more than one hundred thousand Irish refugees to move to what became Atlantic Canada, Quebec, and Ontario. Disease outbreaks aboard passenger ships during the cross-Atlantic transit amplified the tragedy.
Elsewhere in this magazine issue, we recall a Prohibition-era beer battle, remember a dazzling piano duo from Toronto, and share a gossipy tale of class conflict in Upper Canada.
Today there are nearly 4.5 million Canadians who claim Irish ancestry. As for the O’Connells, I’m still not sure why they immigrated to Nova Scotia. Through online research, I discovered that Granny’s grandfather Timothy O’Connell was born in 1838 in Stewiacke, Nova Scotia. His father, also Timothy, was born sometime before 1824, but I’ve found no other information about the date or location of his birth.
One thing, though, is clear — my great-great-great-grandfather Timothy managed to avoid the Great Hunger. While his fellow Irish were starving across the Atlantic, he was already in Nova Scotia — undoubtedly grateful that providence had safely led him to that colony.