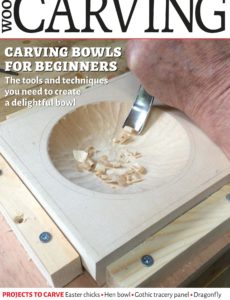 Having fun in what we do is essential, but when talking to people some of the comments can be condensed down to an of ten-used phrase:: “Shoulda, coulda, woulda…”
We have all been there, whether it be a bad day at the office, something that’s not gone right with work or we have some regrets about not having done something or dealt with something earlier. The list can go on and the aforementioned saying can be applied to all of us at times. We all know that life can throw us some curve balls that blindside us and knock us sideways. We also all know that when we set a plan of action for a project in the workshop, a trip away, a route to progression of our career or what we want to do in retirement
etc., things do not always go to plan. When it comes to things that go wrong in the workshop I think foul-ups or mishaps with a piece of work are an annoyance rather than something to get extremely vexed over. Yes, it is time and possibly a wasted piece of wood – and I have many of those – but I have now learned that mistakes lead to greater successes if we take the time to rationally analyse what on earth happened. We learn and move on. In the early days of my apprentice in carpentry and joinery, and also when learning to turn and carve, I would get vexed that I had made a mistake and sometimes my worrying about it meant that I could not appreciate that it was solvable. I always felt that I had let someone down or been stupid for not realizing something was going wrong. In the case of doing so during my apprenticeship the result also led to a time delay and added cost in materials and time. So, added pressure and the embarrassment of making a foul-up and, rest assured, everyone would know about it. That said, making mistakes in the workshop is a different thing all together. You make a mistake, only you know. Well, unless it was a gif t for someone. We don’t want to make mistakes, but we have to accept that we do and we need to learn from them so we hopefully don’t make the same mistake twice.
I can honestly say that I have made the same mistakes, with numerous subtle variants, many times and I accept that I will continue to make them. I am not glad that I do, but I don’t get so annoyed anymore and am able to just move on. I think that time has taught me: don’t get angry, get even.
So the next project – the image shows me turning an item ready to carve with some embellishment. I will try to remember everything that has gone before and the work should and hopefully will run smoother.
Have fun and let me know about your workshop blunders and triumphs.
Mark

To get in touch, please email me:
[email protected]