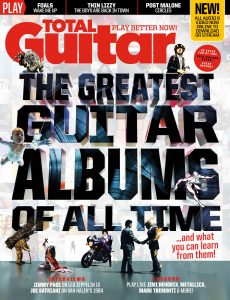 One of the joys of working on Total Guitar Magazine is that we reach so many people who share a passion for our instrument. And, though the print magazine is primarily sold in English-speaking territories, this month we’ve engaged with guitar fans around the globe with a series of polls conducted on GuitarWorld.com. With the aim of deciding the greatest guitar album of all time, we created polls decade by decade from the 1960s all the way through to the 2010s and 2020s. Just over 150,000 votes were cast – a staggering number which truly blows my mind!
So, my thanks go out to everyone who voted. Our huge 50+ page cover feature profiles the top 10 albums in each decade, with every number one getting an in-depth examination, either from the guitarist who made the record or a player notably influenced by it. You’ll find some guitar lessons along the way, too.
It’s been interesting to see some of the musical tastes of our international voters. 90smetal seemed to strike a chord in Australia, with Metallica, Pantera and Megadeth all receiving a big chunk of votes. Pink Floyd are massive in Brazil. As are Dire Straits in Canada. Not many votes were cast from the Czech Republic in our 00s poll, but Alter Bridge took nearly half of ’em. I could go on! The huge worldwide vote has also resulted in some big UK names not really figuring as high as we’d expected. I was betting on Oasis and Radiohead featuring highly in the 90s poll, but both were edged out of the top 10.
Anyway, I really hope you enjoy this special issue of TG. It’s been a blast putting it together. See you next month!