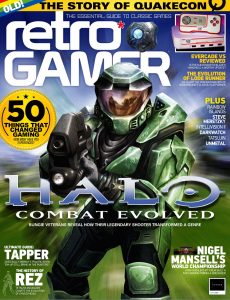 I’ve been trying to think of a time before computer games entered my life. I’m 48 and a third, and it seems like they’ve always been there. There were key moments when they seemed to be more present, if that makes any sense – dad bringing home a Dragon 32 or us all traipsing to Rumbelows in Maidenhead to buy a BBC – but I think they must have been a part of me forever.
Let me try and make sense of these foggy memories and try and put them in order. The first thing I can dimly recall is the Binatone TV Master Mk 8. It lived in a battered cardboard box, and we kept it either under the sofa or in the airing cupboard. (I’m aware that not only the word ‘Binatone’ is meaningless to most people under 35, but so is the phrase ‘airing cupboard’!) This orange and metallic box had a dial and several buttons on the front. It also had detachable joysticks. It’s odd, considering my later love for gaming, but I don’t remember being that bothered about the Binatone. Maybe because it was blackand white, or the rather annoying sound, but something about it just made it boring to me.
At some point my Uncle Hughie showed me a colour football game on his telly. It blew my mind as being so realistic. I don’t think he let me have a go, but I didn’t care. I just enjoyed watching these perfect renditions of men kicking a ball about. I just this second Googled it and as I suspected it was ColecoVision Super Action Soccer. But here’s why memories cannot be trusted and potentially everything I’ve ever written in this column is a lie. I could have sworn I saw this when I was six, around 1979. But it didn’t come out until 1984.
We had a Dragon by then, so games like this weren’t new to me. Handhelds were big growing up, and I’d certainly put them under the videogame heading. Mini-Munchman was a joy, as was Astro Wars. I was once in the audience for Swap Shop and The Carpenters were on. I was sitting just two feet away from Karen (although I was more excited by Bernie Clifton and his ostrich) and they gave away an Astro Wars. I couldn’t date the machines though. I have no idea what age I was when I would spend hours with them on my lap. Christmas could be a great time for getting new hardware, although there would always be one aunt who didn’t quite understand what electronic games were and so would buy you things that LOOKED like handhelds. The disappointment when a rectangular box was opened only to find one of those plastic things filled with water and tiny hoops. You had to pressa button to pump air in to try and catch the hoops on spikes. They were very dull, but now I think on it, incredibly addictive.
This month feels a little rambling and reads like a story my granddad would have told me. I’ve tried to use it to create a timeline of gaming for me, but if anything, it’s left me feeling even more confused about what happened and when. Am I… am I getting old?