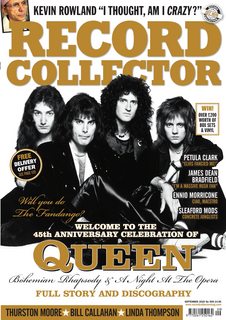 It was in 1975, the year before punk broke, that I was introduced to the notion that, in rock’n’roll, rock music, whatever you want to call it, there was a strict hierarchy of authenticity. “The Original Soundtrack is brilliant. And I hate it,” went the last line of writer Charles Shaar Murray’s March ’75 NME review of 1Occ’s startlingly inventive The Original Soundtrack. Sure, it was clever, impressively so, argued CSM, but it lacked heart and soul. He compared the Manchester brainiacs’ third album unfavourably with the likes of Bob Marley’s Catch A Fire, Dylan’s Blood On The Tracks, Neil Young’s Tonight’s The Night and Patti Smith’s Horses – “real” albums by “real” artists, naked expressions of truth, whereas 10cc and their ilk were mere cold, calculating purveyors of artifice telling you nothing about the human condition .
Queen were one of those bands of 1Occ’s ilk, and if ever a piece of music was dismissed in critical circles at the time as a cerebral folly it was that year’s Bohemian Rhapsody. But reading Nick Hasted’s excellent cover story this month on the making of that landmark single and its parent album, A Night At The Opera, it occurs that the blood in Queen’s (and 1Occ’s, and Sparks’) music was on the tracks – via the sheer effort, the sweat and tears, involved in realising all those absurdly ambitious ideas, those daring arrangements, complex vocals and dazzling song structures. You get a sense here of four young men, fuelled by technical savvy and total self-belief, pushing themselves ever-onwards to create something truly new for the rock realm. Something truly moving in its authentic audacity.
Poignancy, the matter of what’s emotional – it’s in the eye and ear of the beholder, surely? It might be in Kevin Rowland’s brave decision to wear a dress, Petula Clark’s decision to cross continents, James Dean Bradfield’s decision to base his latest music on the lyrics of Chilean activist Victor Jara or in Sleaford Mods’ decision to set their tales of austerity-era Britain to juddering electronics. It’s those moves made in private moments, first in bedrooms and then pursued in studios, by singers and musicians, that are moving, and no way can they be ranked objectively in order of impact. Or is this just fantasy?

Stay safe, and see you next month, Editor – Paul Lester