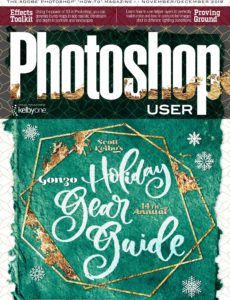 Photoshop User – November-December 2019
English | 134 pages | pdf | 89.18 MBFeatures
068] SCOTT KELBY’S 14TH ANNUAL GONZO HOLIDAY GEAR GUIDE
Even though most professionals know that gear doesn’t make the photographer, many still want the latest and greatest cameras, lenses, lights, software and other gadgets. It’s true that all this stuff won’t make you a better photographer, but it sure can help you get the job done faster and more efficiently. So that’s why Scott has always shared his favorite gear for the past 14 years to make it super easy for you to buy the perfect gift for the photographer (or yourself) on your holiday list.
[060] ADOBE PHOTOSHOP 2020 NEW FEATURES By Scott Valentine
Adobe announced Photoshop 2020 at Adobe MAX. Join Scott Valentine as he as he walks you through all the new features, including the Object Selection tool, unpacking smart objects, and much more!

Welcome to our “14th Annual Gonzo Holiday Gear Guide” issue of Photoshop User magazine. Hard to believe it’s been 14😀 years already. It only feels like 13. I have lots of great gear to share with you this year, from stocking stuffers to higher-priced items that are so awesome it’ll make you wonder if saving money to send your kids to college is really all that important. It starts on page 68.
Of course, the really big news is that we now have Photoshop on the iPad. Adobe has been teasing it for a while, but at the Adobe MAX conference in L.A. ear-lier this month they made it official, and it’s available for download from the Apple App Store. The initial reviews have been, well, let’s just say they were kind of harsh (and that’s being kind). I think part of the reason why it was met with such contempt by many of us in the creative community is that when Adobe announced that Photo-shop on the iPad was “real” Photoshop, we envisioned Photoshop with most of its main tools, filters, and other features all pretty much in place. I don’t think any of us expected all of the features to be there, such as Photo-shop’s 3D features, actions, scripts, automations, and all that, but we thought the core stuff would be there. It’s not. Not even close.
You know and I know that the future is mobile—we’ve heard it a million times by now—and while I agree, Photoshop on the iPad isn’t the future, it’s not even the past at this point, because it’s missing key features that were in Photoshop 1.0 for the desktop nearly 30 years ago: stuff such as Curves (that’s right, no Curves) and Unsharp Mask. In fact, there’s no way to sharpen whatsoever. If you’re wondering about maybe using the High Pass filter, there are no filters. Okay, there’s one: Gaussian Blur. It’s true: Photoshop for the iPad has only one filter.
There’s no Camera Raw either. In fact, it’s pretty clear from what Adobe did include that this initial release isn’t for photographers at all. It’s pretty much just for com-positing or some very, very light retouching. Of course, Adobe already has a free app for compositing called “Adobe Mix,” and yes, it has more features than Photo-shop for the iPad. They also have a retouching app (and it’s actually pretty decent) called “Photoshop Fix.” Seeing as they already had those for years, I’m kinda surprised that Photoshop for the iPad hangs its entire hat on com-positing and retouching, but I guess Adobe would tell you that they already have Lightroom for the iPad, so photographers are covered.
So, who is Photoshop for the iPad for? I’d say it’s for patient people. People who don’t mind waiting for what I estimate to be at least two if not three years until we have what we were envisioning would be in this initial release of Photoshop for the iPad. (And if you’re wondering if I’ve shared these thoughts with Adobe, rest assured I have, in greater detail, with shall we say,“more emphasis.”
They let me know that when they said that Photo-shop for the iPad would be “real” Photoshop, what they meant wasn’t “a fully featured Photoshop like you’re used to.” What they meant was it uses the same underly-ing code as Photoshop on your desktop computer, and because of that, it can open PSD files and sync them back and forth. So, while we have “real” Photoshop on the iPad now, what we thought we were getting was “full” Photoshop. Same number of letters, but the difference is years apart.
Photoshop for the iPad will get better as Adobe adds new features, and I’m hoping that Curves and Unsharp Mask are on their new feature short list, but until then, I’ll be sitting this one out; there are a lot of already pretty incredible editing apps out there for the iPad, including one that has Curves, Sharpening, and can edit your RAW photos, plus it has a ton of other great features and it’s easy to use. It’s called “Lightroom.”

One Response to “Photoshop User – November-December 2019”