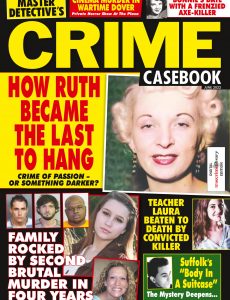 Ruth Ellis, the dyed-blonde drinking-club manageress and killer, went to the gallows 67 years ago yet her story continues to fascinate. She was the last woman hanged in Britain and her case is the final one to be featured in our series on executed women. Was she a cold-blooded murderess or the provoked victim of a cad who should only have been found guilty of manslaughter? Turn to page 12 and Women On The Gallows – How Ruth Became The Last To Hang for the full story. North London teen Bernie Oliver disappeared in January 1967. Ten days later his dismembered remains were found dumped in two suitcases in the village of Tattingstone. Who killed him remains a mystery. See page 21 and MD Forum – Suffolk’s “Body In A Suitcase.” Finally, don’t miss the puzzling case of The Last Man Hanged At Derry. See page 47.
Enjoy

2 FAMILY ROCKED BY SECOND BRUTAL MURDER IN FOUR YEARS
The shocking unrelated and motiveless Alabama murders of Miranda Lynch and her daughter Willoe Watkins
5 PAUL DONNELLEY’S MURDER MONTH
More Murder Months on pages 7, 15, 32 and 49 6 EUROPEAN CRIME REPORT “Teacher Laura Beaten To Death By Convicted Killer,” “The Body In The Ice-Bound Car,” “Holiday Island Rape-Killer Was ‘Soldier Of God’”
11 VIEWPOINT
More of your letters and a chance to win a book
12 WOMEN ON THE GALLOWS:
HOW RUTH BECAME THE LAST TO HANG
The story of Ruth Ellis and the deadly passion for David Blakely that led to his murder
21 MD FORUM: SUFFOLK’S “BODY IN A SUITCASE”
For more than 55 years the grisly murder of teenager Bernard Oliver has remained a mystery
25 HANGED AT STRANGEWAYS: PART SEVEN
How a market trader, night-watchman, iron-moulder and more found themselves at the Manchester prison gallows
30 US EXECUTIONS – THE “ROCK ’N’ ROLL YEARS”: BONNIE’S DATE WITH A FRENZIED AXEKILLER Bonnie Lou Merrill was just 16 years old when she found a summer job at a Columbus, Nebraska, drive-in. What was behind her mysterious disappearance?
36 CINEMA MURDER IN WARTIME DOVER
German bombing meant Dover was a dangerous place to be in 1941. But at the Plaza cinema there was a completely unrelated horror show
40 HORROR IN HIS SNUFF MOVIE STUDIO
Obsessed with Dexter, he made life imitate art
47 LAST MAN HANGED AT DERRY
Convicted murderer William Rooney went to the gallows at Derry Jail in February 1923. Was he the victim of a miscarriage of justice?