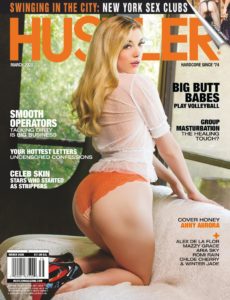 THE CRUCIFIXION OF KATIE HILL FROM Hustler USA MAGAZINE

It was the very definition of a political travesty when Katie Hill, a first-term Democratic representative from California, resigned after explicit private photos of her were published by the right-wing website RedState. The site alleged an inappropriate affair with a legislative aide. The photos were reportedly supplied by Ms. Hill’s estranged husband, and the geeks at RedState had actually worked for Hill’s Republican opponent in the last election. Their goal was to take her down. They succeeded only because Ms. Hill was too humiliated to continue and the Democratic leadership refused to put up a fight, worried more about the optics of the scandal than the substance of it.
RedState alleged a sexual affair between Hill and her male legislative director, which is against House rules. The rules were implemented as part of the #MeToo movement to stop the long history of predatory behavior of mostly male politicians with their female underlings. Katie strenuously denies that she had an affair with him, although she admits to a sexual relationship between herself, her husband and a female campaign staffer—which is not against House rules. The photos show Katie sitting naked behind the female staffer, brushing her hair; another has the two fully clothed, kissing; a third shows Katie hitting a bong.
Okay, not exactly the publicity you want for any political office in America. But there was absolutely nothing illegal or immoral in what Katie Hill did: a consensual relationship with another woman who was not working in her office. And the bong? Pot is legal in California. Plus, she insists that the photos were taken without her consent or knowledge by her now-estranged husband, who successfully used them as “revenge porn.”
Ms. Hill stated the real reason for her resignation in her farewell speech: “I am leaving because of a misogynistic culture that gleefully consumed my naked pictures, capitalized on my sexuality and enabled my abusive ex to continue that abuse, this time with the entire country watching.”
“There are two Hill stories, and they shouldn’t be conflated,” news site The Cut noted. “One is a scandal and the other is a crime. Hill’s choice to engage in an inappropriate relationship with a subordinate doesn’t change the fact that she was the victim of revenge porn.” Alex – andria Ocasio-Cortez further observed, “This doesn’t happen to male members in the same way.”
Indeed it doesn’t. Another California congressman, GOP Representative Duncan Hunter, committed massive campaign fraud, including using contributions to fund two illegal affairs with female staffers, and he’s still clinging to office. The disgraced pedophile Roy Moore is un – abash edly running for office again in Alabama. And of course the lead – er of the pack—accused of more than 20 cases of sexual harassment and assault—is still occupying the White House.
No, Ms. Hill should not have resigned, not as long as these GOP assholes are still running amok. She should have stood her ground. But she felt pressured to resign by her own party. This cannot continue. If we lose more good Democrats like Katie Hill and Al Franken to absurd purity tests, we’ll never get the majority necessary to fight the Republicans on Capitol Hill and make progressive change a reality.
Larry Flynt
Publisher