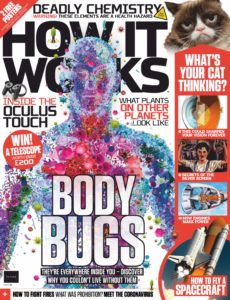 It wasn’t so long ago I learned that every cell in the human body is replaced at least once every ten years. That means you are literally not the same person you were a decade ago. Now, in this issue of How It Works Magazine, I’ve discovered that a large percentage of a human’s total body weight – possibly more than half of it – is microbial bacteria, fungi and other families of microorganisms. So only half of what I thought was me is actually human, and hasn’t even been around for half the time I thought it had! Not to detract from all those friendly bugs in our bodies though: ﬁnd out how important they are on page 22. Enjoy the issue and for more visit our official website www.howitworksdaily.com

When Mount Vesuvius erupted in the year 79 CE, the volcano unleashed an avalanche of gas and rock hot enough to boil blood, vaporise ﬂesh and even transform bits of brain tissue into glass, according to a new study.
Archaeologists rarely uncover human brains during their digs, and if they do, the organs feel soap-like and smooth. During a process called saponiﬁcation, triglycerides in the fatty brain tissue react with charged particles in the surrounding environment, transforming into soap over time. Scientists found something very diﬀerent, however, when they examined the remains of a man who perished in Herculaneum during the Vesuvius eruption.
Enveloped in a surge of hot ash, the victim’s brain had been burned to twisted black bits through a process called vitriﬁcation. The glassy material ‘encrusted’ the surface of the man’s skull.
The unusual discovery was made by Dr Pier Paolo Petrone, a professor of human osteobiology and forensic anthropology at the Federico II University Hospital in Naples, Italy. In their new study, Petrone and his co-authors examined a Vesuvius victim who had died on a wooden bed in a building known as the Collegium Augustalium. The corpse was found in the 1960s, buried within a mound of volcanic ash. Like other victims, the charred skeleton bears the sparse remnants of a skull that burst during the eruption.
The team spotted shards of glassy black material lodged within remnants of the exploded skull and scattered among the remains of the cranial cavity. The analysis revealed proteins known to be found in diﬀerent areas of the human brain, including the wrinkled cerebral cortex, which is responsible for higher brain functions like decision-making; the amygdala, which is important to emotional processing, and the substantia nigra, which helps control movement and our response
to rewards.
Based on analysis of the charred wood found near the corpse, the team determined that the room likely reached a maximum temperature of 520 degrees Celsius. The extreme temperature would have been hot enough to “vaporise soft tissues” in the victim’s body and burn every last trace of fat. Following the brief blast of heat, the body would have rapidly cooled, leaving behind the grisly remains of an exploded skull coated in vitriﬁed brain bits, the authors noted.