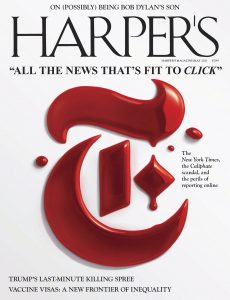 Portion of Republicans who regard Donald Trump as the best president in American history : 1/3
Percentage of 2020 Trump voters who feel more loyal to Trump than to the Republican Party : 54
Who would support a Trump party over the Republican Party : 46
Who believe that the January 6 attack on the U.S. Capitol was largely inspired by Antifa : 58
Minimum number of countries that have criminalized spreading misinformation : 20
Minimum number of people in China who have been arrested for producing fake COVID-19 vaccines : 80
Number of doses produced by one man arrested in February : 58,000
Percentage by which declaring the intent to get a vaccine on OkCupid increases an American user’s chance of receiving a like : 20
Estimated minimum number of U.S. COVID-19 deaths prevented by local moratoriums on evictions and utility shutoffs : 57,000
That would have been prevented had the entire country adopted such moratoriums : 170,000
Percentage increase last year in life-insurance applications from Americans under age 49 : 8
Minimum number of identified long-term effects from contracting COVID-19 : 55
Portion of currently unemployed Americans who have considered changing careers : 2/3
Percentage of men working from home who would feel comfortable returning to the workplace when it reopens : 77
Of women : 59
Percentage change in average U.S. household spending on streaming services since the onset of the pandemic : +24
Average increase in the number of streaming services an American household now subscribes to : 1
Percentage of directly held stock owned by the wealthiest 1 percent of Americans : 51
By the wealthiest 10 percent of Americans : 92
By the bottom 50 percent of Americans : 0
Percentage of Americans who believe the stock market is rigged against amateur investors : 64
Estimated percentage of long-term day traders who ultimately lose money : 97
Percentage of Americans who think the stock market does a good job of measuring the country’s economic health : 17
Amount of energy, in terawatt-hours, used each year in the production of bitcoin : 121
Used each year by the United Arab Emirates : 113
Estimated percentage of energy used in bitcoin production that is generated by nonrenewable sources : 61
Factor by which a solar farm was more expensive to build and maintain than a coal plant in 2009 : 3.2
By which a coal plant is more expensive to build and maintain than a solar farm today : 2.2
Percentage change in overall car sales last year : −14
In electric car sales : +43
Estimated cost of stabilizing biodiversity by 2050 if measures are taken immediately : $7,000,000,000,000
If measures are taken ten years from now : $15,000,000,000,000
Percentage of countries that consume more resources than their ecosystems can regenerate : 74
Estimated number of Earths that humanity would require to sustain its current level of resource consumption : 1.6
Year in which humanity is expected to require two Earths : 2030
Number of years that have passed since Earth previously reached today’s average temperature : 12,000
Number of days by which climate change has lengthened the duration of allergy season since 1990 : 5
Percentage of Americans who are concerned about climate change’s impact on their mental health : 55
Percentage change over the past year in the membership of the Optimist International club : −9