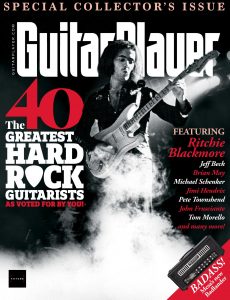 Guitar Player – February 2021
English | 101 pages | pdf | 58.58 MBI GREW UP THINKING of hard rock as dangerous music. I wasn’t entirely wrong. As a young musician with older brothers, and parents who indulged our musical interests, I was exposed to everything from the Who to the MC5 in the 1960s, well before I turned 10, and saw some hard-rock acts of the day performing at free outdoor concerts in and around the Detroit area. It was a rough scene in a rough place, a sense that perhaps no band represented better in their music or stage show than the MC5, a truly revolutionary band of musical rebels. But like most rebellious things, it was seductive as well, and I soaked up everything I could from that time, especially local acts like the MC5, Grand Funk Railroad and the Stooges, whose singer, Iggy Pop, summed up the attitude best when he ominously crooned, “Gimme danger, little stranger.” I can’t think of three bands who could better warp a young child’s mind.
By the time Deep Purple came around with In Rock, in 1970, I was hooked on loud, aggressive guitar rock. I didn’t know much about that group’s guitarist at the time, only that, given the ferocity of his
playing, he must be a sight to see onstage. In time, I would learn that Ritchie Blackmore was one of the most unhinged guitarists to grace a stage from that era, and a man who showed no mercy to his guitar. Sure, Townshend smashed them, destruction was spontaneous and over quickly. Blackmore, on the other hand, prepared for the act and dragged it out, methodical menace. As Rich Bienstock
details in this issue’s cover story.