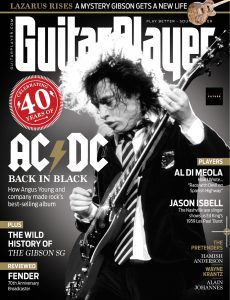 IF THERE IS a message to be taken from this issue’s cover story, it’s simply “Don’t give up.” In early 1980, AC/DC were on the cusp of a commercial breakthrough. Highway to Hell, their 1979 album, had been a Top-20 record in the U.S., putting the Australian group in a make-or-break position to barrel its way to the highest reaches of the charts the next time around.
They had already begun working on their follow-up release.

But the band’s dreams seemed to meet an abrupt end on February 19, when its frontman, Bon Scott, died after a night out in London. Over the next month, the dispirited group considered disbanding. It was Scott’s own parents who convinced them not to give up.
After auditioning singers, they recruited Brian Johnson, the front man for an English glam-rock act called Geordie, who had been one of Scott’s favorite vocalists. Returning to the album they’d been making, the group transformed it into a tribute to their fallen singer — not a sorrowful record but a celebration of his spirit through the high-powered rock and roll that had inspired all of them to become musician at the first place. The result was not only AC/DC’s commercial breakthrough but also an album that has gone on to become the best-selling rock and roll record of all time: Back in Black. Paul Elliott charts the band’s remarkable comeback in this month’s cover feature, revealing their doubts and fears as well as
the tremendous support they enjoyed from fans. Far from calling it a day, AC/DC went on to enjoy a long, thriving career.
As rock and roll survivors go, they are far from alone. The Pretenders also endured the death of their charismatic original lead guitarist, James Honeyman- Scott, coming back strong to release their third album, and their highest-charting record to date, Learning to Crawl. The band has gone through its share of lineup changes since then, but as Chrissie Hynde and lead guitarist James Walbourne tell contributing writer Rich Bienstock, they are back and firing on all cylyndres with Hate for Sale, a hard-rocking (and timely titled) album that rekindles the fire of the group’s earliest records.
Lastly, I ask you to turn your attention to Jimmy Leslie’s excellent interview with Alain Johannes. A Chilean-American multi-instrumentalist and producer, Johannes has enjoyed a long career that winds a path from 1990s alt-rock acts like Eleven to Chris Cornell’s 1999 solo debut, Euphoria Morning, to Queens of the Stone Age and Them Crooked Vultures. In 2008,
ohannes lost his wife and musical partner, Natasha Shneider, to cancer. His new album, reflects on not only her passing but also the more recent deaths of Cornell, Johannes’ parents and an uncle who was his mentor. Hum is a remarkably beautiful album and one in which I’ve found solace in these recent, difficult months. If you want to hear both great guitar playing and inspired music that touches the heart, I encourage you to give Hum a listen.
Finally, if it wasn’t already clear, the spirit of endurance has been on my mind these past days. As I write this, it’s early June and our country is again convulsed by racism following the brutal murder of George Floyd, a black man, in Minneapolis. The fight for justice and equality for people of color in the United States is long and seemingly endless, but the cause will endure because it’s right.
Guitar Player Magazine supports racial equality and those fight for it.