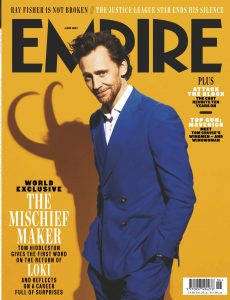 AS I WRITE this letter, the sun’s snuck out for what feels like the first time this entire year — and not only does it feel like spring has actually, finally, arrived, but with it (dare we say) hope. The promise of lighter, brighter days to come. A feeling reinforced by our cover star, the master of mischief himself: Tom Hiddleston. Out of all the nice guys, you know what, he might be the very nicest. Warm, sincere, thoughtful and damn good fun, we had a blast with him for this month’s issue. He spent three hours on Zoom with our Chris Hewitt discussing the upcoming Disney+ Loki show and everything that’s led to this moment in his career. A career full of fascinating, bold choices. Fascinating and bold is how I’d sum up so much of what’s in this month’s issue, especially the conversations that pack it out. There’s Ray Fisher sharing his story of Justice League, but also of before and beyond. Barry Jenkins digging deep into the making of The Underground Railroad. Maria Bakalova on that most surprising, (glorious) Oscar nomination. Zack Snyder on returning to his roots in the most
bombastic of ways. Cate Blanchett on left-field choices. And the stars and director of Attack The Block simply buzzing off being reunited.
I don’t know about you, but I see hope elsewhere. In this moment, a brief pause before screens light up once more. In the next issue of Empire, we’ll be celebrating cinema doors opening, hopefully for good.
There’s that word again. And as listings are updated, screenings announced and the upcoming film slate steadies, I can feel it. Can you? Lighter, brighter days.
They’re right there. Until then, enjoy this issue. We think, hope, it’s more than enough to sustain you.