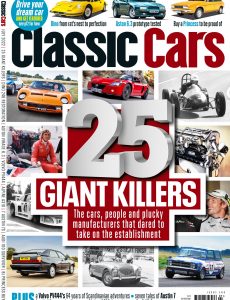 According to anthropologist Kate Box, our support for the underdog stems from one of the defining values of Englishness, that of fair play. In her fascinating and funny book, Watching the English, one of countless supporting observations is that, in the absence of pre-existing loyalties, we will instinctively support the underdog in almost any sporting contest, right up until the point where those unfancied competitors manage to gain the upper hand and begin to dominate, at which point our instincts lead us to switch
support. It’s only fair, after all. So, readers of an English disposition should enjoy this month’s lead story because it shines a big warm spotlight on all things automotive, from nascent car manufacturers to underrated racing drivers, that have dared to have ambitions above their station, taking on the big boys and giving them a damn good thrashing,or at least a bloody nose.
But fear not, this isn’t some flag-waving exercise for the slightly less damp and considerably more southerly portion of our little island – Sam Dawson draws from diverse pots of pluckiness the world over in his pursuit of the best examples.
Outside of that article, a few of our other feature cars could qualify. How about the Ferrari that wasn’t even allowed to wear the company badge because it only had six cylinders. The fact that owners like Gary Bates rate them highly enough to lavish fortunes of time and money on restoring basket cases like this one proves it’s no longer the unloved son of Maranello. Aston Martin, the company that’s bounced back from near-certain defeat more times than Rocky Balboa. Austin 7, a car that has held a cult-like following long after its practical benefit as a slightly more civilised alternative to a motorcycle and sidecar combination was surpassed. Leyland Princess? The Ronnie Barker to the Austin Allegro’s Ronnie Corbett in so many comedy put-downs is developing a cult status of its own.
So is Kate Box right or do you all love an underdog, no matter which part of the world you’re reading this from?
Download from: