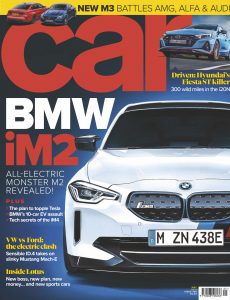 Former Renault F1 boss Cyril Abiteboul and star driver Daniel Ricciardo awkwardly avoiding each other post-split like reality TV contestants, each race weekend a microscope through which to observe their deteriorating relationship. The McLaren bromance of Carlos Sainz and Lando Norris, long a refreshing tonic to the frosty comrade ship that normally characterises the team-mate relationship, rapidly losing its cordiality as the former signs for Ferrari and the latter is snuggled to Zak Brown’s bosom as McLaren’s Chosen One. Haas’s Guenther Steiner spitting swear words like a machine gun, naturally. Valtteri Bottas – the purest, most undiluted form yet discovered of that crucial F1 element, the number two driver, railing against the notion of being a
number two driver.
Like Mercedes-AMG gently evolving its all-conquering car from one season to the next, the third series of Netflix’s Drive to Survive doesn’t mess with a successful formula. Each episode rapidly picks a cast of characters, gives them clear roles (avenging hero, evil corporation, Red Bull-shirt-wearing villain) straight out of the centuries-old ‘How to tell a story’ playbook, and establishes a crystal-clear narrative.
That done (usually inside three minutes), the series stands back and lets what’s always been an enthrallingly Machiavellian sport do the rest, helped along by angular shards of race footage that usefully compress near-two-hour marathons into a series of high-impact moments; those overhead red lights going out, visors clicking down, crunchy crashes, lunging overtakes on DRS fast-forward.
The first lockdown was defined by two things: the daily struggle to obtain canned tomatoes and Netflix’s Michael Jordan epic The Last Dance. Not only did the latter care not a jot whether or not you were a basketball fan, it was crafted with such flair you immediately found yourself regretting your life choices to date.
Clearly basketball was the most important thing mankind had yet found with which to busy itself – what on Earth had you been playing at, failing to see that or make it absolutely central to your existence?
As well as being a great way to see off a weekend when there’s little else to do, Drive to Survive has, in the same way, proved awesomely adept at convincing family and friends that
F1 really is interesting. And for this I will be forever grateful.
For decades I’ve banged on about its near-unique position as a sporting confluence of the technical and the human; about how winning requires the right calculations and cool, machined metal, but that the cars must then be persuaded to do extraordinary things by fragile creatures of blood and bone. I’ve also tried to suggest, with little success, that it’sso much more than cars following each other around in circles; that the fabric of the sport is so rich that each race is assured importance.
What actually happens is almost incidental. Like I say, I’ve struggled. Fortunately, then, Drive to Survive arrived to do the job for me.
Enjoy the issue.