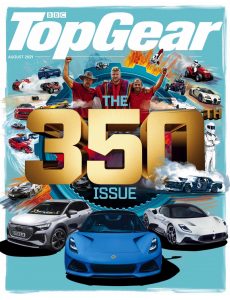 September 1993. I’m a hyperactive nine-year-old whose hobbies include ‘standing on head’ and ‘sweets’, Meatloaf was doing anything for love and X-Files was introducing binge watching as a concept. A new car magazine also appeared on shelves with a leather-clad Clarkson on the cover, a hard-earned photo of every new car on sale, together, and the promise of a MASSIVE FREE POSTER inside. Well, some things just don’t get old, do they?
Here we are, 350 issues later. Slightly fewer cars on the cover, definitely less leather, but the same approach as always – to bring you the world’s best and most beautiful car magazine
celebrating the full spectrum, from supercars to scrappers, and mainlining that joy, our passion, into your eyeballs. Sounds painful, shouldn’t be. If you enjoy reading this mag as much as we do putting it together, perhaps I’ll see you in another 350 issues’ time.
In other news, Top Gear loses one of its legends this month as Charlie Turner moves to pastures new – taking up the role of chief content officer at Ferrari. Our kind of pastures.
As a member of the TG team for almost two decades, editor for 10 of those and the man who preserved the brilliance of the magazine and website in a post-Clarkson Top Gear, his influence is vast and will live on. Here’s Charlie to say a few words. “Thanks Jack. It’d be an epic understatement to say that nothing could have prepared me for the journey I was about to embark on when I walked into the BBC Top Gear UK Magazine office 18 years ago.
The shorthand would be to say that it has been the journey of a lifetime, but those few words simply don’t do it justice. No words truly can. The team’s incredible creativity, passion and
enthusiasm make Top Gear what it is, and to have represented TG firstly as the man in charge of the ‘colouring-in dept’ then as the person responsible for both words and pictures, has been a huge privilege.
“While the cars have been the heartbeat of my time here, and the locations and journeys the stuff of my childhood dreams, it’s the people that make Top Gear unique. I have had the fortune to work with the very best, and I would like to take this opportunity to thank them all for their support throughout the years.
“As I depart to drink too many espressi, I do so safe in the knowledge that I leave you, the most passionate, informed and engaged audience in the world in the capable hands of the most talented editorial team on the planet. Grazie e a presto, Charlie.”
Enjoy the issue,