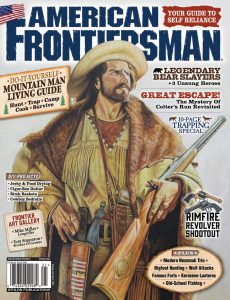 ABOUT THE ISSUE: If you love the American frontier and the Old West, you’ll also love Tom Simonton, the man who created this issue’s cover art. A modern-day mountain man living in rural Oklahoma, Simonton is a painter extraordinaire and he has devoted much of his life to putting oil on canvas to depict frontiersmen, cowboys and other figures of the era. Spending time as a child on his great-grandfather’s cattle ranch helped start Tom’s journey, which has led to being featured at the National Cowboy & Western Heritage Museum.
You’ve already glimpsed some of Tom’s art on the cover. Don’t miss seeing even more, along with the story of his life and art, starting on page 8.
While some people paint the American frontier, others live it. And author Donald Wade Davis does just that on page 4 when he and his companions gear up for the period and take us along for a reenactment at Fort Larned in central Kansas.
If hunting and trapping are among your passions, make sure and read our stories on swamp trapping, beaver sets (and recipes, yum!) and legendary bear hunters. Starting on American Frontiersman magazine page 92, we even prepare you for a wolf attack!
Of course, as in most issues, DIY runs strong in these pages. In this issue we will teach you how to make a frontier-style bedroll, choose and use a kerosene lamp, catch more fish to fill the freezer, make camp utensils with an axe, make a birch-bark basket, create your own cigar-box guitar, dry food for long-term storage and make the best jerky ever!
Last but not least, join us in our quest for the elusive, controversial creature affectionately named Bigfoot. I’m a believer, but on page 64 Bigfoot skeptic Michael D’Angona weighs in on the pros and cons of whether the beast exists or not.
As always, we hope you enjoy reading this issue as much as we enjoyed preparing it for you. Until next time, keep your powder dry. —Mark Chesnut